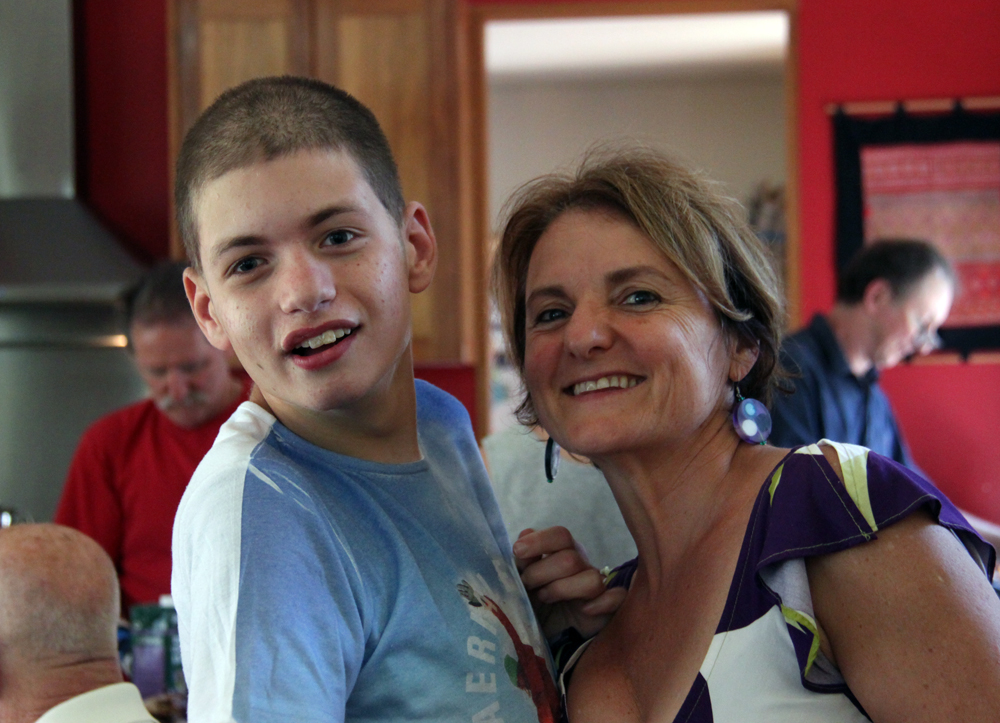 Hear how Shooshi from Wollongong called on disability information and advocacy services in her family’s time of need.

My name is Shoshana (Shooshi) Dreyfus and I am a mother of three young men, one of whom has a severe intellectual disability as a result of a rare chromosome disorder. His name is Bodhi and he’s now 22 years old. Up until he was 17, he lived with us but now he lives in a group home. This is because life was really tough with Bodhi. Even though he’s completely gorgeous, he’s also very challenging – he can’t speak yet he wants to say a lot and you can’t take your eyes off him as he has no sense of danger or what’s appropriate in life. He’s also a really bad sleeper and when he lived with us we couldn’t go anywhere or do anything we wanted to do as a family and we were completely exhausted. It’s really hard to explain the difficulty of life with Bodhi – he broke lots of things – our other kids toys, our books, our furniture and it was relentless. We didn’t know anyone else with a child like him and often times I needed to ask someone who might have useful knowledge to help us and the only place I could get any decent understanding and real answers from was CID – the Council for Intellectual Disabilities. I wish I’d written down all the times I’ve rung them and all the things I’ve asked them but I never expected that I would be in a position to need to remember these to support them from being de-funded. The times I do remember are as follows:

Our son isn’t circumcised and cleaning his genitals is a bit of an issue – need I say more? Due to the hygiene issues I wondered whether or not we should get him circumcised but given his lack of ability to understand things like that I wanted to talk to someone about this and find out whether there was any research on genital hygiene for males with intellectual disability and problems. There aren’t many people to talk to about things like that so I rang CID and had a long chat to the person there and they tried to dig out some research for me so I could get a better understanding of the issue. This was years ago but from memory, they were really helpful – they understood and I didn’t feel embarrassed or ashamed to be asking the questions. They didn’t make me feel stupid and they took my concerns seriously and looked for relevant information on my behalf.

Another time I called them was when Bodhi was 17 and we were at the end of our tether, having had a few rounds of emergency respite funding and the like. We were barely coping from the 17 years of sleep deprivation and non-stop running after Bodhi. Our marriage was suffering and our other kids were suffering. At that point, we were told that a group home was being set up for three young men in our area who were either wards of the state or blocking respite beds and that Bodhi could have the fourth place in the group home on one condition – that we make him homeless first. This was because the NSW government didn’t/doesn’t provide housing for people under 18 as they ‘should’ be living in the family home. Of course this seemed outrageous to us – we were barely coping as it was and to have to engineer a further crisis by either not picking our son up from respite or dropping him off at the police station and then having to be answerable to DOCS etc was too much. At this point I again contacted CID as I wanted to get the facts: was it true that we would have to make our son homeless to get a place in a group home? What was the history of this kind of situation? What had other people done in similar situations? etc etc. They were really helpful and armed with my ‘facts’, I wrote to the Premier and the Disability Minister and the head of ADHC and all the chain of command through my local area and we managed to avert that crisis and gain the place for our son in the group home and move him in slowly at a pace that suited him, and he’s been living there ever since. We see him twice a week at least and we are really involved with the group home and we have a normal life back, which for us, is extraordinary!

By next year, disability information and advocacy services like CID will lose their funding from the NSW Government. Take action and #Standbyme to help us to continue to protect and uphold the rights of people with disability.