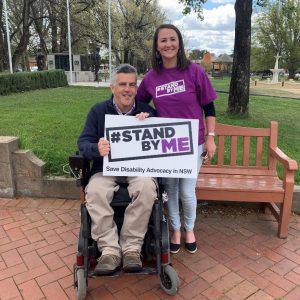 Glenn had submitted an Internal review with NDIA because he knew immediately after his new NDIS plan arrived that his funds would not last the year. This situation caused massive stress for Glenn and his family. He was concerned that he would have to sack his staff who help with his personal care as he would not be able to ensure that they could be paid. Naturally this caused additional stress and strains on his family relationships.

He engaged Disability Advocacy NSW approximately three months before his funds would completely run out. Glenn and his advocate Eveleen wrote many emails, complaints and support letters, and made numerous phone calls to the NDIA to get his review expedited. Glenn and Eveleen took the matter to his local Federal MP to try to get some traction. A final email to the NDIA brought the matter to the attention of the local regional NDIA office to be handled immediately, as by that stage Glenn had two weeks before his funds would be exhausted.

NDIA made contact for a review meeting to develop a new Plan.  The plan arrived with one week to go, and the issues were resolved. Glenn was able to keep his staff and the supports they provided.